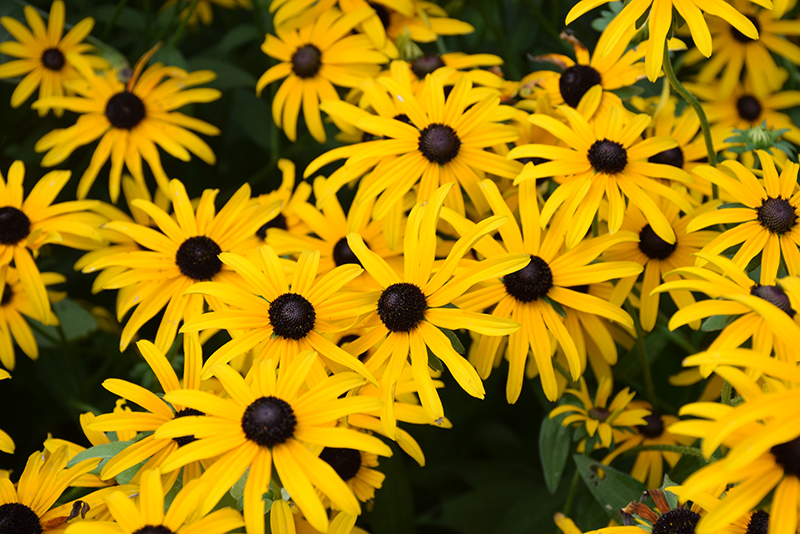 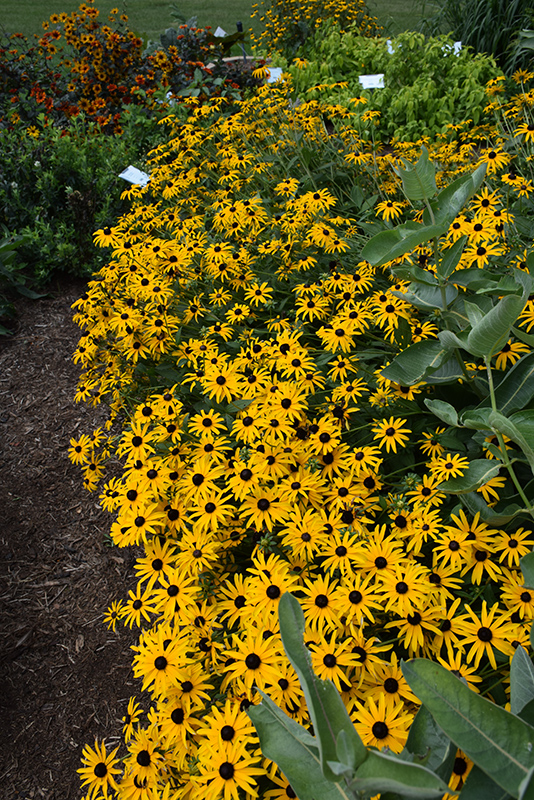 This vigorous variety has excellent disease and pest resistance; large yellow flowers with narrow petals and dark brown cones in late summer to early fall; ideal for gardens and containers; will freely self sow when seedheads are not picked

Deamii Black Eyed Susan has masses of beautiful yellow daisy flowers with dark brown eyes and a orange flare at the ends of the stems from late summer to early fall, which are most effective when planted in groupings. The flowers are excellent for cutting. Its pointy leaves remain dark green in color throughout the season.

Deamii Black Eyed Susan is an herbaceous perennial with an upright spreading habit of growth. Its medium texture blends into the garden, but can always be balanced by a couple of finer or coarser plants for an effective composition.

This is a relatively low maintenance plant, and should be cut back in late fall in preparation for winter. It is a good choice for attracting butterflies to your yard, but is not particularly attractive to deer who tend to leave it alone in favor of tastier treats. Gardeners should be aware of the following characteristic(s) that may warrant special consideration;

Deamii Black Eyed Susan will grow to be about 24 inches tall at maturity extending to 3 feet tall with the flowers, with a spread of 24 inches. When grown in masses or used as a bedding plant, individual plants should be spaced approximately 18 inches apart. It grows at a fast rate, and under ideal conditions can be expected to live for approximately 15 years. As an herbaceous perennial, this plant will usually die back to the crown each winter, and will regrow from the base each spring. Be careful not to disturb the crown in late winter when it may not be readily seen!

This plant should only be grown in full sunlight. It prefers to grow in average to moist conditions, and shouldn't be allowed to dry out. It is not particular as to soil type or pH. It is highly tolerant of urban pollution and will even thrive in inner city environments. This species is native to parts of North America. It can be propagated by division.

Deamii Black Eyed Susan is a fine choice for the garden, but it is also a good selection for planting in outdoor pots and containers. With its upright habit of growth, it is best suited for use as a 'thriller' in the 'spiller-thriller-filler' container combination; plant it near the center of the pot, surrounded by smaller plants and those that spill over the edges. It is even sizeable enough that it can be grown alone in a suitable container. Note that when growing plants in outdoor containers and baskets, they may require more frequent waterings than they would in the yard or garden. Be aware that in our climate, most plants cannot be expected to survive the winter if left in containers outdoors, and this plant is no exception. Contact our experts for more information on how to protect it over the winter months.